Back in the Saddle

Lady was the first horse I remember riding.  To be more accurate, Lady was a brown pony with a prickly personality and fierce disdain for tailgaters.  She once kicked the Colonel when he stood too close to her hindquarters. Lady belonged to a family friend and, despite being slow and stubborn, I never complained. Horseback riding was a rare treat and bringing up the rear was a small price to pay. Lady never showed me the least bit of trouble, nor I her, so ours was a peaceful, if not affectionate relationship.

In the years since Lady I've ridden a handful of times, each time with greater ease. I've also had more experience around animals in general, what with our two dogs and ten hamsters. I've even been dubbed the dog whisper by a few dog owners, eliciting behavior from their pups that they'd never seen before. Let's just say my animal self-confidence has grown considerably since the days of Lady. That's what makes what I'm about to share that much more shocking.

We were tandem biking in Idaho, Kirk and I on one contraption, the girls on another. The scrub covered hills of Sun Valley and the quirky ski town were begging to be explored. En route, we biked past a pasture where horses grazed on scrub under an overcast sky. A couple on foot had just finished feeding chunks of apple to a pair of tall brown stallions who had wandered over to the split log fence. The man and woman were now were trying to pose with one of the horses for pictures, but it wasn't going so well. The stallion clearly wanted more apples and kept nudging away their attempts to pet him in search of snacks. I held out a closed hand for him to sniff, but he quickly deduced that I was apple-less and turned away. When the man tried to pet his muzzle again, the horse tossed his head back and whinnied in protest. Instinctively I placed a hand on his side to calm him, murmuring, "You're alright." That's when the beast whipped his head around and bit me. Not on the hand, but on the...well it might be mistaken for an apple...or a peach.

It was by far the most intense pain of my life. My clothes weren't torn, but the crushing pressure and my struggle to get away left marks that are still fading. I pedalled away from the pasture with tears streaming down my face. I was in shock. Had that really happened? Horse whisperer, I was not.

That afternoon we were scheduled to go on a trail ride. I considered begging off. After all, I had one hell of an excuse. I knew, however, that if I let myself sit out once, I might never get near a horse again. So I loaded up on pain killers (and two jog bras) and headed out the door. You can imagine my relief when I learned it would be a 45 minute drive to get to the stables. These horses would not be Jaws or any of his pasture-mates. Even so, I mounted Fiona with trepidation.

"She's stubborn, a bit slow, and doesn't like tailgaters," the handler told me.

I smiled and took the reins. "Perfect."

I murmured to Fiona throughout the ride, patting her neck and holding on tight as she kicked at the horse behind her for riding too close. She was Lady reincarnate, just what I needed.

I've often referred to my dogs as Golden Chickens. Despite being classified as large dogs, Golden Retrievers — or shall I say our Goldens —tend to behave in ways that call their canine qualifications into question. Honey, God rest her soul, once sausaged herself between two pickets of our black aluminum fence in a desperate attempt to evade thunder. At over 70 pounds, she was no fly-weight, and the pickets couldn't have been more than six inches apart.  Needless to say, it took a mighty hug and tug to pry her lose only to have her bolt seconds later.  To her credit, she was a tireless waterdog and retriever of floating sticks, but one clap of thunder reverted her to Golden Chicken-with-her-head-cut-off status. Maya, our current Golden, is fine with thunder and explosives. It's men, feet, thermometers, garden gnomes, and cars that send her into a mindless tizzy. The list could go on, but time is precious. So if Honey was a chicken, Maya might qualify as a chick with a fear of hatching.

Maya's first experience with water was the garden hose. She'd discovered a puddle created by a leaky outside faucet and had played to her heart's content until interrupted by the girls. The result looked like this. 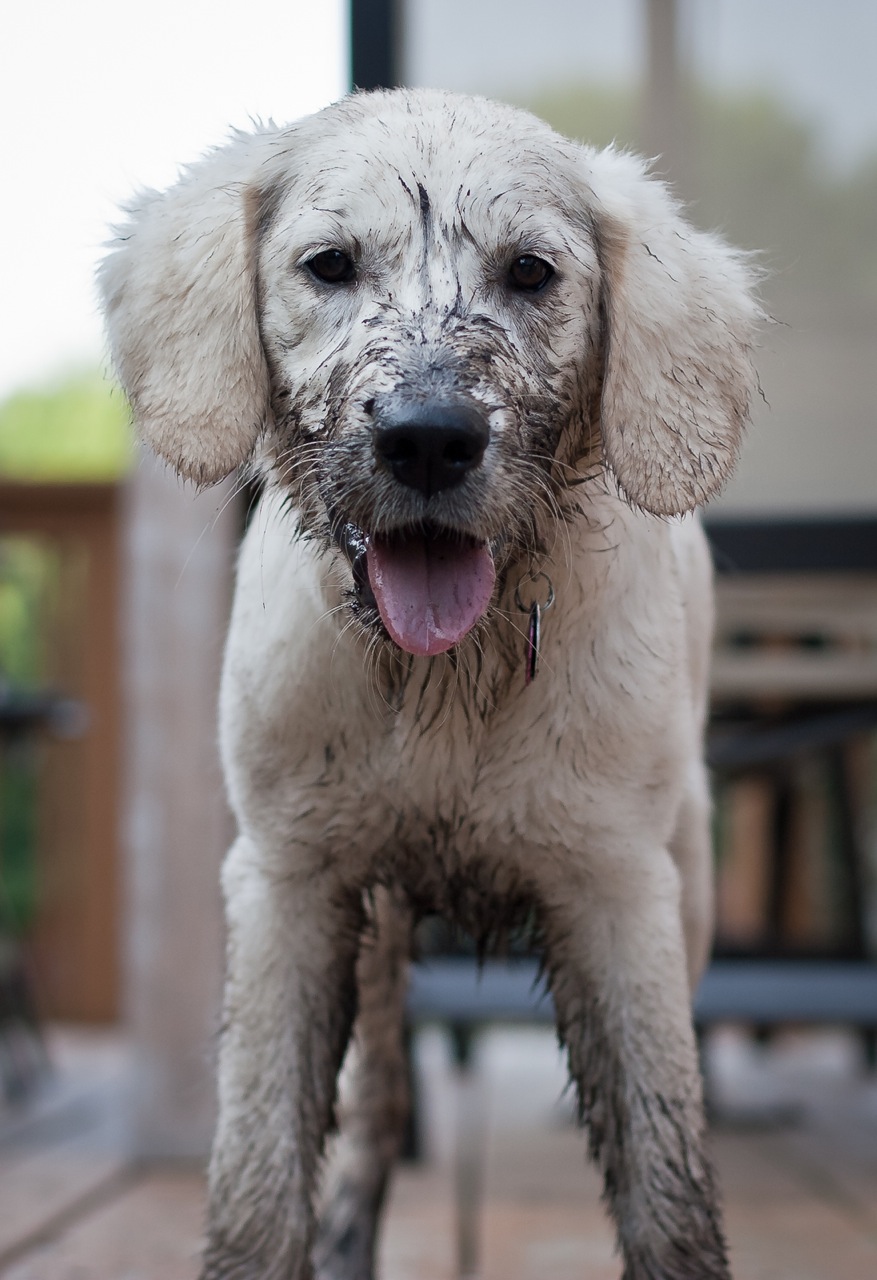 Little did she know that the the faucet had, if not a dark side, a much colder one. I sometimes wonder if this first chilly rinse contributed to her aversion to water. Later that summer we took her to Oak Run and tried to coax her into the lake. At most she waded ankle deep. We tried again at our friends' heated pool. She hated it, recoiling between deck chairs to avoid the gigantic turquoise tub. It was hard for us to believe a purebred waterdog could hate the very thing that was in her nature to love. We couldn't keep our first Golden out of the water. Now we had one we couldn't get in.

It may come as no surprise to you that Seattle is particularly dog-friendly. Dogs can be found everywhere, from the grocery store to the mall. According to our banker, dogs are more welcome in the branch than children. We couldn't ask for a more perfect environment to break Maya out of her proverbial shell. Our first mission: swimming.

The off-leash park we frequent has a slow moving river along one edge where dogs are welcome to dive in and cool off. The water is shallow enough in parts that even short dogs (and Golden chickens) can wade without actually having to doggy paddle. It took one visit for Maya to overcome her fear of wet rocks, a few more to wade in unaccompanied. Big thanks go to Emma and Mouse who called her tirelessly from knee deep water as Maya whimpered and paced on the water's edge. After nearly three months of practice, Maya is almost there. She enters the water from shore without cajoling and can finally swim without her front paws clawing the air on each stroke. She still won't leap in from a swim platform or dock, but I have faith that will come. She's even retrieved a floating stick or two! Seattle: the land of small miracles. 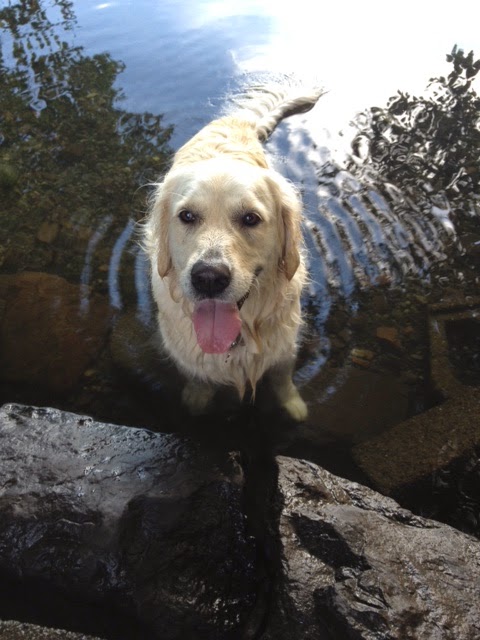 The question now is which fear to conquer next? Human feet or garden gnomes? I think the gnomes have it.
3 comments:

I am in a holding pattern of sorts, waiting for my Washington State teaching certificate. The process is complex, with many required documents, references, forms, exams, and cash outlays. I appreciate why many professionals refuse to stray further than their first professional leash will allow. The  tedious redundancy and expense of crossing state or international borders is ridiculous.
At the very least I will need to sit two two-part tests to teach elementary school. Should I wish to venture into middle school (yes, I'm that crazy), I must take up to an additional four.  The first two-part test determines if I can read, write, and do extremely basic math. (God help us if our universities produce graduates that don't have this! Note: one needs to graduate from college to earn the right to take this first test. It seems we can't be too careful. Even Illinois insists on this one. Yes, I passed it there. No, it doesn't matter.) The second two-part test ensures I know how to teach. I passed that one in Illinois, too. Guess what else doesn't matter?
So I've decided to stop applying for jobs only to hear nothing back, most likely because I don't have a certificate yet. It seems my mind is happy to fill the ensuing silence with relentless self-depricatory remarks. Entering an interview with such uncertainty does very little for my self-confidence. I've never had much of a poker face. In my heart I know I am a good teacher. I know I love to do it and my students can tell. So, I'm doing my best not to choke up when seeing the piles of back-to-school supplies. My teaching-self is on sabbatical in one of the most beautiful places on Earth.

Still, some parts of moving stink.
No comments: